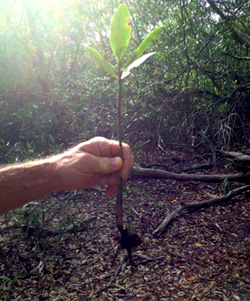 In late 2013 the Board of Supervisory Directors of the Aruba Ports Authority approved a Green Port Policy. The strategy will translate the port’s vision into action by taking the Oranjestad community in particular, the island’s economy, and environment into account in everything they do by committing to the protection and progress of the environmental conditions of the waters under jurisdiction of the Aruba Ports Authority Oranjestad and Barcadera harbors. The first green initiative taken by the port is a thriving mangrove reforestation project initiated in mid-2013 on a badly damaged reef island across from the Oranjestad harbor. This area is also one of four (4) IBA’s or Important Bird Areas that were previously protected by lush Black and Red Mangroves over fifty (50) years ago.

The Power of Change

The Aruba Ports Authority has commenced a mangrove reforestation project on a badly damaged reef island where only one mangrove remains standing. This area is also one of four (4) IBA’s or Important Bird Areas that were previously protected by lush Black and Red Mangroves over fifty (50) years ago.

What exactly happened has not been scientifically documented but according to island tales part of the reef was damaged by the tail of Hurricane Janet, one of the most powerful tropical cyclone of the 1955 Atlantic hurricane season and one of the strongest Atlantic hurricanes on record.  There are other accounts that attribute the damage to an innocent beach BBQ gone wrong which led to a fire that destroyed the majority of the remaining trees.

After announcing the completion of the site plans conducted by Mangrove.org‘s   Bob Riley, Port Director Alfonso Boekhoudt announced that the project was a go.  Riley conducted an appraisal to develop site plans with specific ecological and enhancement objectives for the reforestation of the Mangrove on the reef across from the Cruise Terminal.

The appraisal analyzed the critical elements in degraded or damaged ecosystems including shoreline dynamics, anthropogenic factors, ecology, hydrology and where necessary, geopolitical influences.

In May Mangrove.org experts lodged approximately two-hundred (200) encasings on the smaller reefs across from our cruise terminals. Media supporters, Port Authority Volunteers and their children assisted by dropping the Red Mangrove seedlings (Rhizophora mangle), which blooms throughout the year on Aruba, in anticipation of the creation of a habitat for many species of amphibians, reptiles, and mammals.

The port sees this as a chance to not only restore the reef to its original state but also as an opportunity to shield the quayside of the island’s harbors from swells that cause the deterioration of the wharf on a long term basis. Needless to say a successful project will result in organizing Mangroves as feeding and nursery grounds for a variety of fish and several bird species.

Cruise visitors entering the channel will be able to observe the project’s encasements planted on the three Southwestern islands along the waterway as they pull into the cruise terminal and as they sail out of it. The first leaves are expected to peak out of the encasements within three (3) to five (5) years, and  within ten (10) to fifteen (10) years  we will be able to appreciate a lasting legacy for sustainable management in future generations. 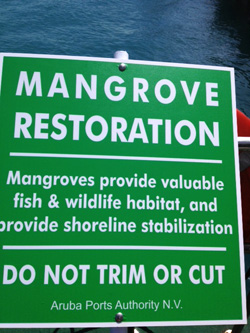 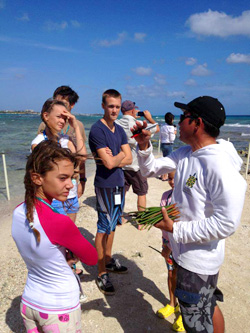